As I turn off the road and onto the track that leads to the river it’s not the sight I am expecting. Looking forward to a remote few hours on the Honddu, I’m confronted by what looks like a well established campsite and the usual array of green, orange and blue tents.

There is the smell of campfire and breakfast on the air. A few early risers (people not fish) are friendly enough as I pass and make my way downstream of the bridge to the bottom of the beat. The campers are as entitled to be here as me, but I’m already feeling out of sorts.

The Honddu below Llanthony

No reason really, the river looks good with a nice flow and very clear water.  I decide to fish with a pair of nymphs, traditional upstream rather than European style. Nothing for twenty minutes then I hook and lose a small brownie in some pocket water before bringing another to hand. They seem to be in the quicker water today. I hook and lose two more as a spaniel from the campsite follows my every move from the bank. At least he’s not interested in a morning bath.

As I fish past the campsite my mind is wandering. I’m not sure if it’s the smell of bacon but I’m not even looking when the next small trout snatches the pheasant tail. This time he stays on and the fly falls out as I cradle him in the water before he bolts for cover. 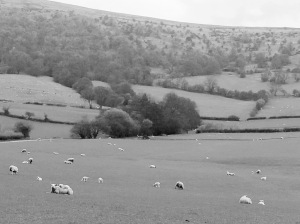 Back at the car I grab a drink and a rethink.  I’m not fishing well. I’m stumbling around heavily and in this small stream stealth and presentation is paramount.

I resolve to give myself a metaphorical kick up the arse. The early morning sunshine disappears and now the wind picks up with a little rain in the air. I head upstream where I’ve only the sheep and new lambs for an audience.

There is no surface activity but I decide to tie on a dry emerger and prospect. I’ll probably miss out on more of the lovely little brownies in the quicker water but maybe I’ll tempt a better one up. I’ve a rhythm going now and perhaps a quarter mile above the bridge my fly is taken as soon as it lands and a better fish is soon to hand. A good fight, quick picture and he’s back. Unfortunately, my mood uplift is short lived, as I follow this success with two casts into a tree before putting a knot in the end of my furled leader! Time to call it a day.

As I drive away it’s warming up and this is probably the time I should be arriving. The Honddu is a lovely stream in a beautiful valley. Today I’ve not made the most of this Monnow tributary and I’ve only myself to blame.

I decide to cheer myself up and stop at the Half Moon for a pint. I’m greeted with a warm welcome and a “what can I get you on this beautiful Spring day”?  Not such a bad weekend after all. What do they say about even a bad day fishing being better than a good day anywhere else… 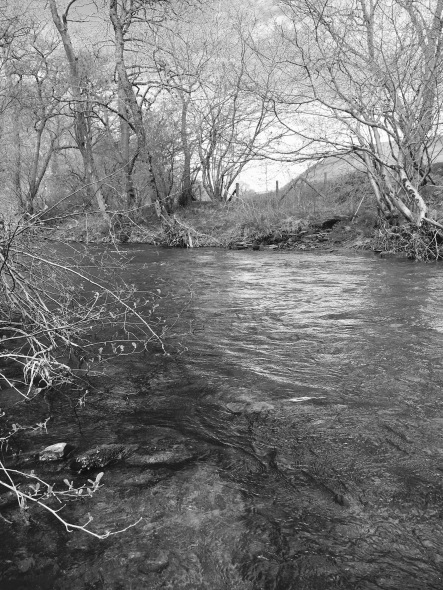 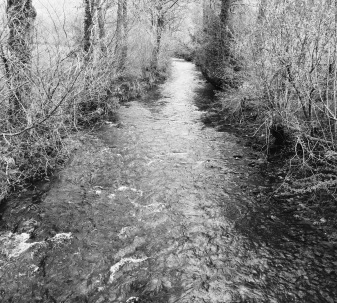 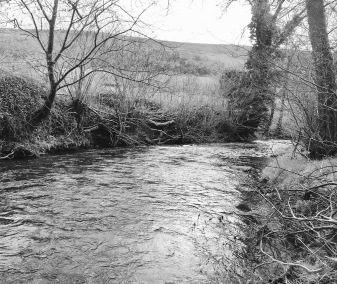